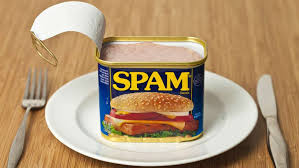 I hate SPAM. I don’t mean the kind that fills up your email box or offers to help you lose weight, increase your sexual pleasure, and make your lovemaking last hours? I mean the disgusting, canned pork shoulder and assorted gelatinous parts kind that stays ‘fresh’ and edible for about fourteen years. When I was growing up, I was convinced our family was so poor that we could barely make ends meet. Every couple of weeks, we ate SPAM for dinner, probably a few days before my dad’s payday rolled around. I remember trying to smother it with mustard to cover up the taste, and though I can’t remember, I’ll bet my brother drowned his in ketchup; he used ketchup on everything and even ate ketchup sandwiches (two slices of Wonder Bread with nothing but ketchup in between).

I remember that a can of SPAM came with a little key that, when inserted into the appropriate spot, allowed the holder to twist away the canning that surrounded the slimy, brick-like substance therein. Watching my dad open the can was almost an adventure because I recall he and Mom telling me once that you had to be an adult to open SPAM, or you could risk slicing your small fingers right off. I don’t remember seeing a warning label with such information on the SPAM, but to be honest, I didn’t look that closely because being in that close a proximity to SPAM also meant being close to the smell.

To this day, the thought of SPAM makes me gag and makes me think of being poor. It wasn’t until long after I was out of high school that I realized we never really were as poor as I believed. I think we were actually relatively comfortable. I wish I had known then that we were not flat broke. Maybe I would have joined a sports team – something I never did because I was terrified of the drive home from away games because they always stopped at McDonald’s or Burger King for food, and I never had any money.

I wonder what would have happened if I had not worried about that stop for a quick dinner because I’d been given $2 to take for that purpose? I wonder if I would have become more confident. I wonder if I would have found a way to finish college even after being told I was $300 short for the year, or if I would have felt compelled to marry the first person who asked me, or ended up living in my Pontiac Phoenix for a couple of weeks and sleeping under the drafting table at my office. And I wonder if I’d be less hesitant to spend $28 on an accessory for my kitchen that will make me so happy in the beautiful kitchen in the house that Dan and I bought and paid for in full.

I wonder about these things on a night when there is light glowing in the windows as the rain falls and makes the mountainside a million shades of green, and I am about to have a cup of hot tea, and I was confident enough to hit the BUY NOW button on the kitchen accessory that will make my kitchen pretty and my heart happy in the home I worked so hard to buy and the one in which there will never be a can of SPAM.