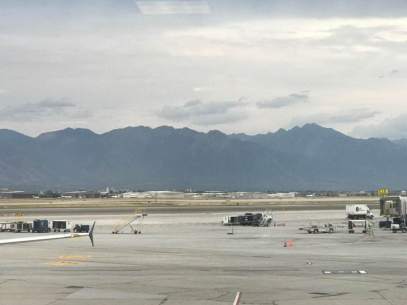 We woke at 2:00 this morning, exhausted but excited to be heading to the airport to embark on another bucket list item – an Alaskan cruise. Everything was packed, the car was loaded last night, and even Dan’s coffee was made in advance; I was congratulating myself on how organized I’d been for this trip. About a mile from the house, Dan asked if I’d remembered to make sure I had the current passports instead of the expired ones. I admit, I got a little testy, asking him how he thought I had checked into the flight with the expired ones. Sheesh!

Driving before dawn is a pretty sweet time of day if you’ve got to travel, and we made great time on the way to the airport. We even found a perfect parking spot under a tree, and as we unloaded the suitcases, the shuttle pulled into the parking lot – our chariot to the adventures that awaited. Except that I couldn’t find our passports – not even the expired ones. I went through suitcases and camera bag, laptop case, and even through all my pockets and the glove box in the car. I even double-checked in my bra because, well, maybe I’d slipped them in there and forgotten. But there were no passports.

It didn’t take long for me to start panicking. I told Dan I was going to check again, but we’d driven a long way, and I knew I wasn’t going to be able to focus on the search until I’d found a bathroom and answered avery important call from nature. But that wasn’t to be.

There wasn’t a rest room in sight, and the only building nearby was the glass portico where the shuttle bus had come (and given up on us when we hadn’t shown up for our ride to the terminal). In desperation and freaking out more than a little, I found an exceptionally dark spot under a nearby tree. It was still the dead of night, of course, but I am modest to a fault, and since it looked like this massive confusion over the location of the passports was indeed my fault, I needed to solve at least one crisis quickly.

Have you ever noticed how long it take when you’re in a compromising position to complete your business and return to nature that giant cup of tea that was so enjoyable on the way in? I felt like I would never finish, and I was sure someone would be pulling around the corner, scoping out free parking spaces just in time to learn that, while it’s common knowledge what bears do in the woods, the same cannot be said for middle-aged women in dark parking lots at 4 a.m. One set of headlights flashed but blessedly, headed in the opposite direction.

As soon as I had finished my uncomfortable relief, I headed back to the car for another search of everything in the car, the suitcases, and the ground nearby, all to no avail. About halfway through the final search, I felt the all-too-familiar sting of fire ants around my ankle. Have you ever noticed that fire ants seem to silently communication with one another, quietly climb up the feet of their victims, and then send out some sonar or sign language message to, “Attack!” all at once? Well, that’s just what happened, and by the time I’d brushed them off and crushed as many as I could individually, they’d nailed the whole lower half of my leg and my right wrist and forearm.

I hopped and stomped and tried to search all at once, and it was just about them that I remembered I’d slipped the passports into my purse to be sure I wouldn’t forget them. Of course, at the last minute, I had decided I didn’t really need to bring a purse because everything fit so neatly in my giant camera case. I confessed to Dan, expecting him to be angry or call me a fool, and I wouldn’t have been surprised if he’d reminded me that he’d reminded me shortly after leaving the house to make sure I had the passports. But here’s what happened instead.

Instead, he hugged me and said there must be a reason why we were not supposed to be on that early morning flight or arrive in Vancouver early enough in the day to have a chance to look around and explore. He said we’d get the flight rescheduled, and the unexpected delay would give us a chance to go home, take a quick nap, and feed the dog a little special treat since we’d be gone for a whole week. And with no fireworks, no shouting, and no demoralizing or devaluing (other than the huge ration of frustration and berating I was dishing out to myself), we got back into the car and started out of the parking lot.

And then another surprising thing happened. The gate attendant whose job was to collect our parking fee, asked if we’d just arrived, and when we told her we had but that we were also just leaving to go home and get the forgotten passports, she closed her register and waved us off, telling us she hoped the day would get a little more smooth.

The flight got rescheduled, we had a chance to catch a couple hours of sleep before we had to head out for the next flight, the dog and cats were elated to see us, and most of all, I had a chance to be reminded why I have chosen to spend my life with my husband. During the ride home, Dan gently chastised me for berating myself and calling myself an idiot for forgetting something so important. Before long, we were laughing about it, and I was thinking about how great it is to share this life with someone who balances out my moments of melodrama and smooths out the rough edges I beat myself up for having.

If it seems like I’m attaching too much importance to a simple act of forgiveness and tolerance, please know that my history would beg to differ. When a similar act of forgetfulness  happened in my first marriage, I had to flee in the middle of the night, fearful for my life. How wonderfully far my life has come both in the gift of such profound love and acceptance and in my own ability to recognize that a lapse of memory or an honest mistake do not ever warrant being abused or mistreated physically or emotionally.

I’m writing this from an aisle seat of the rescheduled flight…yes, it was possible to fix the mistake that at first seemed so impossible. And I’m feeling so much gratitude and love for the chance to cross off a bucket list item and wake up every morning with someone who loves and accepts me, flaws and all, and who laughs it off when the best laid plans of a weary wife go awry. There really is a silver lining to every cloud, and in my case, that silver lining came to me in the form of a gold band and a chance to share my life with someone whose love is a circle of consistency and kindness. Is it any wonder I have an attitude of gratitude? 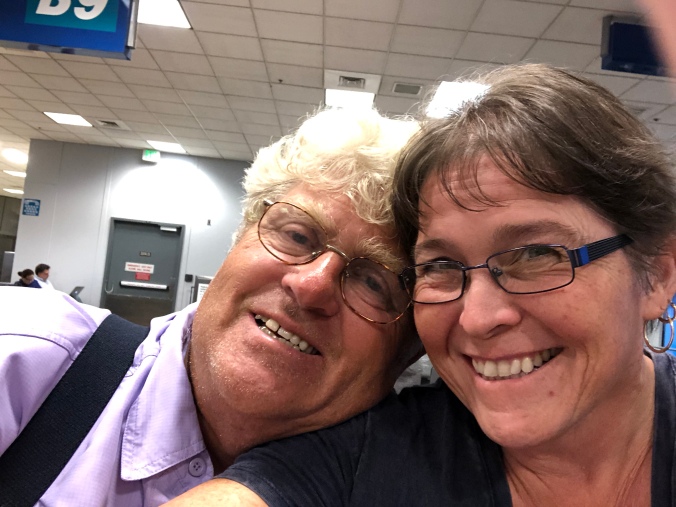