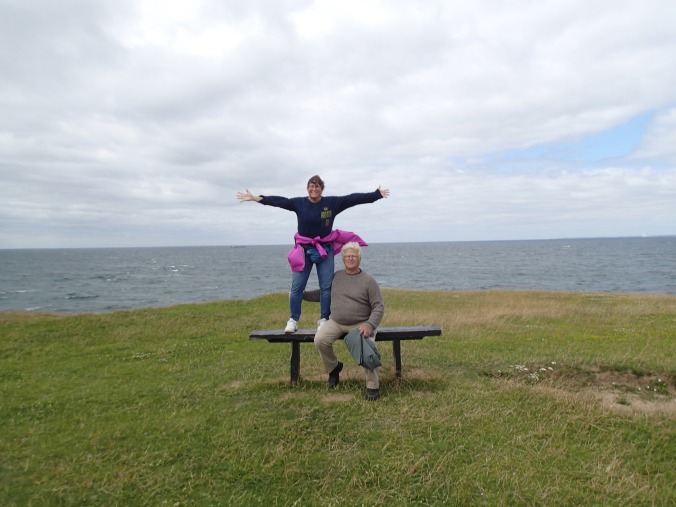 The old saying is, “Life is just a bowl of cherries,” and  today was definitely a bowl of very tasty cherries. We packed up the car, and everyone headed for Kerteminde, a small town on a fjord which was picturesque and very windy. It was so windy we had to do a tailgate lunch, but it was a delicious feast, and once fortified, we headed up the windy trail to what has, for the second time in just a couple of weeks, felt like the top of the world for me. Between the pastoral fields of sheep and cows and the beautiful views of the water and tall grasses, we were able to fill our lungs with fresh, clean air and enjoy a day that got progressively sunnier as it went along.

After hiking to the top of the cliffs, we made it back to the car and on to a beach where the water probably was crystal clear and probably would have been a gorgeous blue – if it wasn’t too cold to change color. Sasha was the only one brave enough to jump in and wade far enough to go out over his head. The rest of us appreciated his tenacity from the safety and much warmer position on shore. It was, as my grandma would say, very brisk.

I would like to say that it was for the sake of the children that all day long we eagerly anticipated the end of the day, when we’d agreed to stop in Kerteminde for ice cream at a shop known for its tasty treast, but I’d be lying. We were all looking forward to it. I chose a blackcurrant sorbet, and I enjoyed it Danish-style, which means they put a glop of meringue in the cone before putting in the quiescently frozen dairy treat itself. Typically, they top that with meringue and jam, but that was more sugar than I could handle. I kept my cone naked on the top, and it was the bombdiggity – probably one of the best ice cream cones I’ve had in a long time.

As it happened, Tamara had been aware that the village of Kerteminde was holding its annual cherry festival, so we strolled around town with our ice cream, browsing the items for sale at the local shops and listening to not one, or two, or three, but no less than four musicians of differing varieties, playing for whomever would listen. It was terrific, and I think it was the perfect way to end the day….until we made it home safe and sound, everyone went to bed without too much trouble, and Sasha poured Tamara and I a glass of South African wine. I’d love to write more tonight about the wonderful day we had which was a reminder that life is really just a bowl of cherries, but I’ve already nearly finished my glass of wine, and I think it’s best that I stop writing while I’m still sort of making sense.

Two more days here in Denmark, and we’ll have to head back to Dublin for our flight home. This has truly been the trip of a lifetime, and I’m so grateful to have had the opportunity. Life really is a bowl of cherries, and it’s so wonderful to finally be tasting them and savoring their sweetness for myself. Lucky, lucky me!